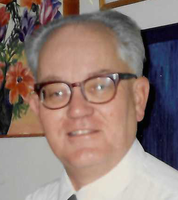 Schenectady, NY-Charles F. Weick, Phd., 90, formerly of McClellan Street and a resident of the Kingsway Community, passed away Sunday, March 21, 2021 at Ellis Hospital. Born on January 19, 1931 in Buffalo, NY, he was the son of Herman and Florence (Skinner) Weick. Charles was a 1953 graduate of Mt. Union College of Alliance, OH and a 1959 graduate of Rochester University with a Phd in Chemistry. He retired in 1996 from Union College in Schenectady where he was a professor of Chemistry for 43 years. He was a member of the American Chemical Society (North Eastern Section) and served as secretary for eight years. He was also a member of the Union College Alumni Bowling group, Faith United Methodist Church where he served on several committees, the Student Research at Union, and was a past member of the Buffalo Bills Marching Band. His past times included bowling, skiing, and golfing at Schenectady Municipal Golf Course. He leaves his wife Janet M. Weick; two sons: Brian L. Weick and his wife Cynthia of Carmel by the Sea, CA and David F. Weick and his wife Cynthia of Flagstaff, AZ; as wells as a sister Evelyn Miller of Buffalo. A graveside service will be held on Thursday July 8, 2021 at 10 AM at Park View Cemetery in Schenectady, NY. There are no calling hours. Arrangements are by Jones Funeral Home, 1503 Union Street, Schenectady, NY. To leave a condolence for the family, please visit www.jonesfh.net.