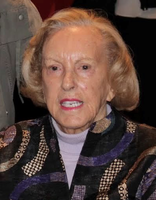 Niskayuna-Betty Apkarian, 92, of Niskayuna, died on Saturday, March 27, 2021 following a lengthy illness. Born in Schenectady, she was a daughter of the late William and Hazel Kernigans Bradley. Betty grew up in Schenectady where she attended Schenectady public schools. In 1966, Mrs. Apkarian was married to her beloved husband, Harry and, for many years, they resided in Loudonville before moving to Niskayuna. Betty was employed by General Electric in Schenectady and Mechanical Technology, Inc., of Latham, as a legal assistant and stock transfer agent. Betty enjoyed spending time with her family and found special pleasure in being with her grandchildren. She also enjoyed golfing and bridge. Betty was extremely active in various community organizations such as Niskayuna Community Foundation, Proctors Theater, American Red Cross, American Cancer Society, Sunnyview Hospital and Schenectady Girls Club. She was a member of Calvary United Methodist Church in Latham. She was the beloved wife to the late Harry Apkarian; the loving mother of David (Tammy) Apkarian of Niskayuna, cherished grandmother of Brittany (Christopher) Tropp, Abigail Apkarian, and Zachary Apkarian; dear sister to Henry (Christen) Mock of Broadalbin Raymond (Linda) Mock of Contoocook New Hampshire, Loving Sister to the late Jeannie Manchester. She is also survived by several stepchildren and grandchildren, nieces, and nephews. All services were private. For those who desire, contributions, in memory of Betty Apkarian, may be made either to the Niskayuna Community Foundation, 2 Tower Pl, Albany, NY 12203 or to Proctors Theatre 432 State Street Schenectady, NY 12305