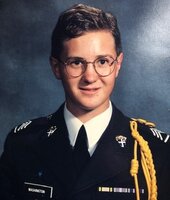 James Edward Washington, 45, formerly of Wendell Avenue in Schenectady, passed away Saturday 5-14-22 at Good Samaritan Hospital in Troy NY after a long struggle with illnesses complicated by cardiac issues. James was predeceased by: his mother Kristen Lund Washington in 2006, his father William Richard Washington in 2015, both of Schenectady; his grandfather William Randall Lund in 2018 and grandmother Stella Lund in 2008, both of Niskayuna NY; his two great aunts Marie Fyllingen of Kingston NY in 2010 and Grace Lund Lemontt of Rohnert Park CA in 2021; his uncle Peter Robbins of Manhattan in 2013; and his best friend and ‘big bro’ Joe Woods of Albany NY in 2016. -James is survived by: his uncle Andrew B. O’Keefe Sr. and aunt Karen Lund O’Keefe, both of Cincinnati OH; his aunt and ‘big sister’ Janet Randall Lund of Niskayuna NY; his cousins (the loves of his life): Kelly O’Keefe of Dayton OH; Dr. Andrew O’Keefe, Jr. (Amy) of Chicago IL; Michael O’Keefe (Angie) of Cincinnati OH; Brian O’Keefe (Jenni) of Bend OR; and Brendan O’Keefe of Monarch Farm Cortland, Scott NY and Michelle O’Keefe of Scott/Homer NY. -Thank you to those special people in James’ life who personally and professionally went above and beyond for him: Danielle Walters Social Worker; the entire Riggi family, especially Matt and his mother Susan; Josie Woods of Albany; Attorney William Kinery Esq. of Albany; Attorney Stephen Levy Esq. of Albany; cousins Linda and Brian Dillion of NC, and Barbara and Don Smith of Bradenton FL; the Lemontt family, the Swanson family; the staff at Adult Protective Services of Albany; the family of Annie Metz Smith of Manhattan; Brian Lansley of Jones Funeral Home; the people and staff of St. Kateri Tekakwitha Parish. -James was known as a ‘character’, with a fast, clever wit and absurdist sense of humor that often flew over everybody’s , heads. Although often overwhelming, James was still considered by most to be a sweet, loving, good man who fought fierce daily battles with his lifetime illnesses which kept him from fully living his life. After all is said and done, James was loved. As with all people from the most difficult populations, his life matters enormously. -He was proud of being a good athlete. As a student, he succeeded as a competitive golfer. His love of ‘the great golf courses’ spurred him to work as a caddy at the prestigious Wingfoot Country Club in Mamaroneck NY in the 1990’s. -He had a profound love of time spent with his family at Lake George and the Adirondacks, boating, swimming and jumping off cliffs. He was a skier throughout his life, going whenever he could with his cousins Brendan on Eastern slopes and his friend Matt Grubbs in Aspen Colorado. -A MASS OF INTENTIONS FOR JAMES WASHINGTON is scheduled for 9:00am on Monday May 23rd at St. Kateri Tekakwitha Catholic Church located at 1803 Union Street in Niskayuna NY. A coffee & cake reception will immediately follow in the vestibule of St. Kateri on Union Street. -CONTRIBUTIONS: As one of James’ top passions was the development of new and old trends in culinary arts, it’s fitting that IN LIEU OF FLOWERS, contributions can be made to the WORLD CENTRAL KITCHEN. Founded in 2010 by the revered humanitarian Chef José Andrés, WORLD CENTRAL KITCHEN, has provided millions of meals every year in response to humanitarian crises while working to build resilient food systems in communities whose lives and livelihoods have been hit the hardest by natural and humanitarian disasters. Most recently, over 20 million meals have been brought to the war zones and borders of Ukraine and Poland where refugees have had to flee. To donate to WORLD CENTRAL KITCHEN, visit their website: www.wck.org to select the method that is easiest for you, i.e. Paypal, credit card, bank transfer, ApplePay, Venmo. Your contribution can be made ‘In Memory of James Edward Washington.’ Our family made it a point, at the end of every phone call with James, to say “I love you!” so it would always be the last earthly thing we said to each other. I LOVE YOU, KIDDO!