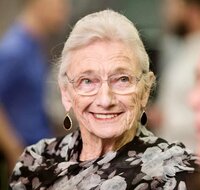 Barbara Miner Landon Barbara Miner Landon passed away peacefully on May 26, 2022 at her home in Tucson, Arizona, with her family beside her. Barbara was born on January 25, 1926, to Elsie Timmerman Miner and Sidney David Miner, in Peoria, Illinois. She graduated from Peoria High School and Knox College, Galesburg. It was in her Junior year at Knox where she met and married Roy Ned Landon. They moved to Schenectady, New York in 1954 when Ned was hired by General Electric Research and Development Center. They made their home at 1925 Dean Street, 1370 Road, and later at the Eddy in Niskayuna. At the age of 90, Barbara moved to Tucson. Barbara's life was centered around her family and friends. She was a fantastic cook and loved to entertain, special occasions were her forte. While being a dedicated wife and mother, Barbara found joy in her Book Clubs, Junior League, Bridge Groups, PEO, Pi Beta Phi, Garden Club, Quilters, and Queen's Fort. She sat on the boards at Girls Inc., Ellis Hospital, and the American Red Cross. Barbara and Ned were longtime active members of the First Reformed Church and The Mohawk Golf Club. Barbara was athletic and loved swimming at MGC and at their home pool. The family home was known as "Camp Mammy and Gramps" for the summers the grandchildren spent there swimming, eating ice cream sandwiches, and playing with the dogs. Mammy was camp leader and Gramps took zillions of pictures of the family. Barb and Ned traveled the world and enjoyed taking their family to Disney World several times. Mrs. Landon is predeceased by her loving husband of 65 years, Ned Landon, her parents Sidney and Elsie Miner, her sister, Dorothy Miner Bliss, and her son-in-law Terry Plum (Sydney). Barbara is survived by her four daughters: Sydney Landon Plum, Lucinda Landon, Lynette Landon Dray (David), and Sara Landon-Socha (Michael). Ten grandchildren; Noah Dray (Alana), Lizabeth Cole, Micah Dray (Brooke), Trevor Plum (Brandy Vickers), Hilary Plum (Zach Savich), Eliza Kelly (Ian Kelly), Alex Egan (Celene Menschel), Eric Egan (Sara Miga), Zoe Socha, Grace Sanders (Joseph); Great-grandchildren; Ruby, Elkë, and Iver Sorensen, Arlo and Vada Dray, Edith and Eames Kelly, Berit and Valen Plum, Ned and Calbert Egan, Landon and Ascher Egan. Barbara was known for her sense of humor, generosity, and gift for speaking what was on her mind. She was an avid reader. Besides her children, grandchildren and great grandchildren, she was the mother to many canine children, including a dozen or so Cairn Terriers who were great family members and brought her tremendous joy. A Celebration of Barbara’s life will take place July 10th at the Mohawk Golf Club between 4:30-6;00pm. Interment will be private at the First Reformed Church