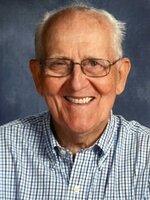 Schenectady-Fred John Thompson Jr. 83, passed away peacefully Tuesday June 21, 2022 in Schenectady, NY with his wife and children at his bedside. Fred was born in Gloucester, Massachusetts in 1939 to parents Fred John Thompson Sr. and Marjorie Cole. Fred attended Gloucester High School, Wentworth Institute and received his Bachelor’s from St. Rose in Albany. He began his career with General Electric in Cleveland, Ohio and later moved to Schenectady working as a field engineer, around the world with gas turbines. His career led him to international product service management as well as recruiting and consulting. Fred and Virginia Voelker met in Schenectady at a St. Patrick’s Day green beer party where they began their lifelong friendship. They were married on July 2nd 1966. Later they had two children. Fred was a member of the Schenectady Winter’s Sports club, car clubs, enjoyed running road races and long distance bike trips. As the grandson of a schooner captain, sailing was close to his heart. In 1991 a personal achievement of his was being part of the team that sailed to victory in the Mayor’s Cup on Lake Champlain. He also enjoyed vacation time with his family on Sanibel Island in Florida. After retirement he traveled extensively with Virginia to numerous locations around the world. He and Virginia also enjoyed volunteering and being supporters of Friends of Schenectady Public Library, Proctor’s Theater, Saint Rose, Lock 23 and the Mohawk Bike Trail. Fred is survived by his wife, Virginia, his two children, Elizabeth and Eric, 3 grandsons and his sister Christine Burnett. For an update on a service please check the Jones Funeral Home website.