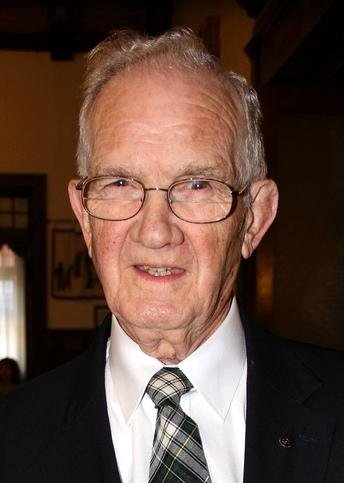 Wallace M. Campbell, 89, died peacefully at his apartment in Kingsway Village on March 19, 2019 after living most of his life in Scotia.

He was preceded in death by his loving wife of 63 years, Ruth MacKenzie Campbell.  Also, his parents Neven and Mamie Campbell, and three siblings Ione, Welma, and Bert.

Wally was raised in Black Cape on his beloved Gaspe Peninsula in eastern Quebec.

He and Ruth were married in 1951 and he began his banking career by rolling coins, then becoming a teller at a Chicago bank.  They moved to Scotia in 1957 and he began working for the Schenectady Savings Bank (later renamed), working there his entire career until he retired in 1990 as president.

He was a graduate of the American Institute of Banking and the Graduate School of Savings Banking at Brown University.  He was a member of First Presbyterian Church in Schenectady for more than 60 years and served there as an elder, deacon, trustee, and missions’ treasurer.

Wally’s life was all about others.  His life exemplified his cherished Rotary Club motto of Service Above Self.  He served on dozens of church and community boards, including First Presbyterian Church, the Salvation Army, City Mission of Schenectady, Camp Pattersonville, Albany Bible Institute, Ellis Hospital Board of Trustees, the United Way, YMCA, Boy Scouts of American, Chamber of Commerce, Boys Club, Heritage Home for Women, Union College, along with dozens of others.  He was a Trustee of the Village of Scotia and member of the Mohawk Club.

Among many honors bestowed on Wally were the Liberty Bell Award from the Schenectady County Bar Association, Paul Harris Fellow and Rotary Lifetime Achievement Award from Rotary Club, Patroon of the City of Schenectady, and the Silver Beaver Award from the Boy Scouts of America.  Along with his family, the one he felt was greatest was having the dining center at the City Mission named after him.

He was in good health, other than suffering a fall in 2017.

Memorial gifts to The Salvation Army (Schenectady) or City Mission of Schenectady.

Share Your Memory of
Wallace
Upload Your Memory View All Memories
Be the first to upload a memory!
Share A Memory
Plant a Tree