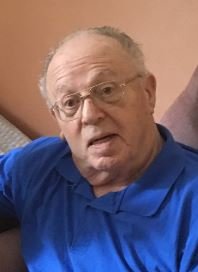 Please share a memory of Joseph to include in a keepsake book for family and friends.
View Tribute Book

Joseph T. Pavone, Sr., of Central Avenue passed away on Wednesday, April 10, 2019 at Hudson Park Rehabilitation and Nursing Center. He was 80.

Born on October 28, 1938 in Albany, son of the late Salvatore and Susan (Oliver) Pavone. He is the husband of Bernice J. Kot.

Joe served in the US Air Force from 1955 until his honorable discharge in 1959. He most recently worked as a carpet installer for Gentile Flooring in Albany.

Joe is predeceased by his son, Kevin Pavone and a sister, Marion Serekis.

Calling hours will be a Tuesday from 4 pm to 7 PM at the Jones funeral home,  1503 Union St., (at McClellan St.), Schenectady. Burial will be private at the Gerald B. H. Solomon Saratoga National Cemetery with military honors.

Share Your Memory of
Joseph
Upload Your Memory View All Memories
Be the first to upload a memory!
Share A Memory
Plant a Tree