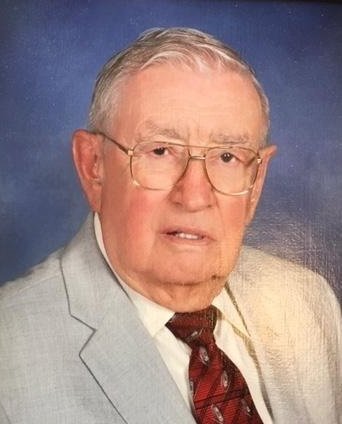 Rexford-Robert J. Christoffel (Bob), of Coburg Village, Rexford, NY, passed away on July 24, 2019.  Bob was born on October 26, 1927 in Syracuse, NY to Karl and Kathryn Christoffel.  He graduated from Most Holy Rosary High School in Syracuse in 1945.  Bob attended RPI and was awarded a Bachelor of Science degree in Metallurgical Engineering in 1951 and a Master of Engineering degree, also in Metallurgical Engineering in 1956.

Bob worked at General Electric in Schenectady, NY at the M&P Lab as a manager.  He was active in the American Welding Society and was named a Fellow of the AWS in 1993.

Bob was an active member of St. Helen’s parish.  In his later years Bob was a resident of Coburg Village in Rexford, NY, where he was the editor of “The Villager” newsletter.

Calling hours will be Sunday from 4 PM to 7 PM at the Jones Funeral Home, 1503 Union St.,(at McClellans St.), Schenectady.  A Mass of Christian burial will be Monday July 29th at 10 AM at St. Kateri Parish, 1803 Union St., Niskayuna.  Interment with Military honors will follow at Most Holy Redeemer Cemetery, Niskayuna.

In lieu of flowers, the family requests that a donation be made in Bob’s name to the Bethesda House, in Schenectady, NY.

To plant a beautiful memorial tree in memory of Robert Christoffel, please visit our Tree Store