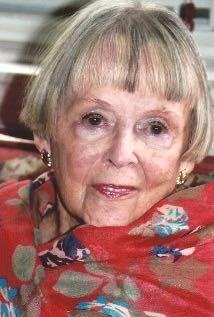 Please share a memory of Susanna to include in a keepsake book for family and friends.
View Tribute Book

Susanna Sherwood died on August 3 after a brief illness. She was 93. Susanna was born on October 11, 1925 in Long Beach, California. She attended schools in California, New York and Washington D. C. She graduated from the Sara Dix Hamlin School in San Francisco and was an alumna of the George Washington University and SUNY Empire State College.

Susanna exemplified public service, over the years volunteering as a Nurses Aid for the Red Cross in WW II, a girl scout troop leader, and for the Schenectady Garden Club, Stockade Association, St. George’s Church Altar Guild, and as co-chair of the Schenectady County AIDS Task Force.  She was an active member of the Pi Beta Phi Alumnae Club of Schenectady, Mental Health Association, the Stockade Book Club and National Cathedral Association. Susanna retired as Director of Volunteer Services at Ellis Hospital in 1990, and was an Honorary Member of the Association of Directors of Volunteer Services of the Capital District.

After many years as the wife of a military officer moving throughout the country from California to New Mexico to Washington, D.C., Susanna and her husband, Jim, finally settled in the Stockade neighborhood of Schenectady where they lived for 53 years. Susanna was a mentor and friend to many, often through her work first as director of volunteers in the mental health department at Ellis, and then as Director of the Volunteers at the hospital itself.  She and Jim were active members of their Stockade neighborhood and supported many efforts to preserve its historic character. She combined her love of gardening with her love of the Stockade by establishing the Stockade Garden Group, organizing volunteers to create flower beds in Riverside Park and elsewhere.

Susanna is preceded in death by her husband of 58 years, Lt. Col. (ret.) James M. Sherwood, USMC and their daughter Fredrika Anne. She was the daughter of Admiral Willard A. Kitts, USN and Fredrika Jones Kitts.

Share Your Memory of
Susanna
Upload Your Memory View All Memories
Be the first to upload a memory!
Share A Memory
Plant a Tree