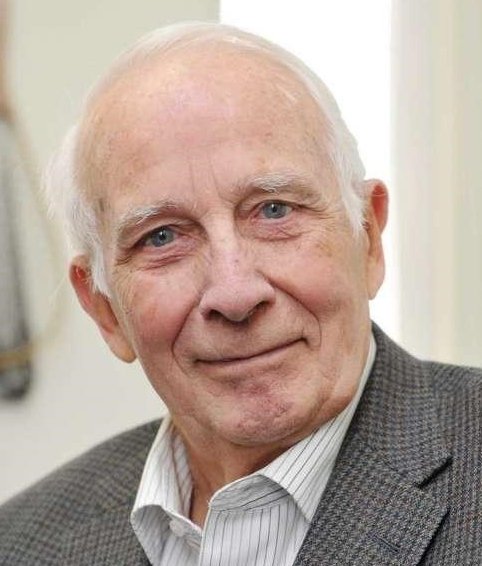 Please share a memory of Walter to include in a keepsake book for family and friends.
View Tribute Book
Walter Lee Robb passed away on Monday, March 23, 2020 at the age of 91. Walt was born in Harrisburg April 25, 1928, and raised in New Bloomfield, PA. He earned his B.S. at Penn State and Ph.D in Chemical Engineering at University of Illinois, both in three years - a record at UI. At age 23, he joined GE, where he soon created the first artificial silicone membrane. Dr. Robb was awarded 12 patents primarily dealing with permeable membranes and separation processes, and is the author of several published articles in professional journals. While heading GE Medical Systems he directed that organization's growth into the world's leading producer of medical diagnostic imaging equipment, turning it into a billion-dollar-plus per year advanced technology business with more than 10,000 employees worldwide. Under his management, GE introduced computer tomography (CT) and magnetic resonance (MR) scanners that are now established as the standards in diagnostic imaging. He then become president of GE Healthcare and director of GE Global Research and a member of the company’s corporate executive council. In August 1951, Walt moved to Schenectady where he met Anne Gruver, marrying here in February 27, 1954. He began his 42 year General Electric career at the Knolls Atomic Power Laboratory in Niskayuna, NY. While there he worked on projects for Hanford and Savanah River, both AEC laboratories. Transferring in 1957 to the GE Research Laboratory, he concentrated his work on permeable membranes, developing silicone films that duplicated the permeability of the human lung. This work resulted in his team reproducing an artificial gill and a human lung, that was the precursor of the membrane lungs used now in heart surgery. He established a membrane operation in GE, resulting in his membranes being used in several commercial blood analyzers. In 1971, Jack Welch appointed him General Manager of the Silicone Products business, then the Plastics Division, and in 1973, the Medical Systems Business in Milwaukee, Wisconsin. He became a GE Vice President in 1974, and a Senior Vice President in 1984. In 1993, after retiring from GE, President Clinton awarded Walt the National Medal of Technology for leadership in CT and MR imaging. Walt received numerous other awards as well. In 1989, he became the first recipient of the Medical Technology Leadership Award presented by the Diagnostic Imaging and Therapy Systems Division of the National Electrical Manufacturers Association. He holds honorary doctor of engineering degrees from Worcester Polytechnic Institute (1988) and the Milwaukee School of Engineering (1994). In 1987, he was presented The Penn State University Distinguished Alumni Award, where a large alumni hall bears his name. In late 1986, Walt and Anne returned to Schenectady, when he became the first engineer to be named Director of the GE Research and Development CenterIn Schenectady, Walt was a Senior Elder of the First Reformed Church, and served as a member of the RCA Synod Executive Council. He was an early and 25 year board member for Paul Newman’s Double H Ranch for sick children, a 30 year member of the Board of Proctors Theater, and the owner of professional teams in the American Hockey League (Albany River Rats); and the American Indoor Football League (Conquest). Anne and Walt received many other recognitions for their generosities and service in the Capital Region. “We are a Joint Venture”, Walt would humbly say. Continuing to go to the office until just days before his death, he was the president of Vantage Management, Inc, and was CEO of MeOH Power. He was an investor in and director of 10 start-up companies. Walt also was an active philanthropist and served as the Treasurer for The Double H Camp, where the main ski slope is named Robb Run. He was also an avid outdoorsman - having hiked to the base camp of Mount Everest at age 72 and reaching the peak of Mt. Kilimanjaro at age 69. He enjoyed playing tennis, cheering for Penn State football, sailing at Lake George, solving Sudoku, talking business, and spending time with his wife and family. He will be missed dearly, by his family, and by all who have encountered his warm demeanor and sharp mind. In 2014, Walt published a book entitled: Taking Risks – in Business and Life”. Walt believed his success resulted from doing more than was required. Walt is survived by his wife, Anne, three sons all in Massachusetts: Richard (Marge) of Marblehead; Steve (Kim) of Wayland, Lindsey (Marin) of Jamaica Plain, and five beloved granddaughters, who are the joy of Anne and Walt’s life: Mackenzie, Hayley, Kelsey, Carly and Kyle. He also leaves behind a brother Herb of New Bloomfield, PA and a sister Kay of Peoria, Il. Private burial will be in the First Reformed Church Columbarium. Memorial contributions may be made to the “Double H Hole in the Woods” at RD 2, Box 228 Lake Luzerne, NY 12846; or to the First Reformed Church, 8 North Church Street, Schenectady, NY 12305. A celebration of the amazing life of Walter Lee Robb will be held at the First Reformed Church, 8 N. Church Street, Schenectady, beginning at 2PM. Those wishing to attend are asked to register in advance at www.1streformed.com. Masks will be required of all attendees, and proper social distancing measures will be in place. The service will also be live streamed via the church's web site. An opportunity to meet family members at a safe distance will occur immediately after the service.
To plant a beautiful memorial tree in memory of Walter Robb, please visit our Tree Store
Saturday
3
October

2:00 pm
First Reformed Church Of Schenectady
8 N. Church Street
Schenectady, New York, United States
Those wishing to attend are asked to register in advance at www.1streformed.com. Masks will be required of all attendees, and proper social distancing measures will be in place. The service will also be live streamed via the church's web site. An opportunity to meet family members at a safe distance will occur immediately after the service.
Need Directions?
View Map | Text Directions | Email Directions
Online Memory & Photo Sharing Event
Online Event
About this Event

Share Your Memory of
Walter
Upload Your Memory View All Memories
Be the first to upload a memory!
Share A Memory
Plant a Tree